Brisbane Powerhouse put on a very fine evening of drinks and nibblies at the launch of World Theatre Festival this week. I liked the idea of WTF from the beginning because it meant Ben Law’s face was on posters all over Brisbane and every time I saw one, I remembered The Family Law and giggled. (Ben, are you even part of WTF, poster aside?) The festival itself has a great line-up from Europe, the USA, Chile and NZ, as well as home-grown talent.

While we clutched our free wine and cider (the twittersphere keeps mentioning the WTF cider!), The Rat Trap, part of the festival’s Scratch Series of works-in-progress played out on the Turbine Platform. Sure, Polytoxic’s latest work is a little rough around the edges, but the audience was enraptured. With great costumes and a fantastic soundtrack (CW Stoneking and Amanda Palmer, together at last), the Polytoxic crew showed off some very promising choreography. I particularly loved the remote-control ratties and the swinging-from-the-lampshades dance routine. I wanted more from a one-trick strip to Palmer’s Missed Me, and couldn’t help but feel that the Siamese twins with the ping-pong balls were getting a bit too close to being offensive. But that’s what the Scratch Series is about—trying things out and trying things on, and The Rat Trap hit the mark far more often than it missed. With a bit of polish and tightening up, this will probably have the same obsession-creating effect on me that Cantina had at last year’s Brisbane Festival. 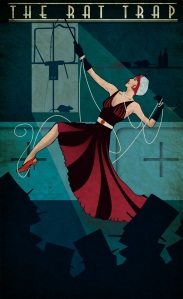 Apollo 13: Mission Control is an “interactive, intergalactic theatre piece” from the Land of the Long White Cloud. I was really excited to be one of the 100 “staff” working at Mission Control to help safely launch and land the Apollo 13, so I was a little disappointed when I ended up in the Press Gallery, looking on. Luckily, the friend I brought along managed to get in right up the very front, in the middle of all the action. The set is fantastic; audience members sit at 1970s-style computer consoles with functioning phones and video and shiny buttons. The cast went around sprucing up the new staff by handing out ties and tubs of Brylcreem. We (the pretend press) were handed a clipboard to jot down questions for the astronauts. We were all ready to be lifted off into funland.

The difficulty with a show like this—a recreation of a shuttle launch—is how to turn it from a historical event into theatre. Punters at consoles were given (rather involved) manuals to read, equations to solve, numbers to ring, and questions to answer, but ultimately nothing the audience did had any effect on the plot or characters. From the press gallery, there were lots of flashing lights and goings on—and lots of shouting—but I couldn’t see much meaningful interaction. I enjoyed the chats with the newsreader (great moustache!) and the astronauts, but my favourite scenes in the control room involved my buddy up the front hijacking the set, taking hold of a microphone, and making an air filter out of a tissue box, a vacuum tube, and sticky tape. His feedback was that the play felt like it couldn’t choose between serious re-enactment and freeform play. When he steered Apollo 13 in the latter direction, faces in the audience lit up.

At its worst, it felt a bit like a dud Thank God You’re Here segment; at its best, it was a joyous and chaotic rush of actors and punters playing together whilst machines made exciting pinging noises. I saw a lot of genuinely bored and anxious faces sitting at consoles, which is certainly a pity—but I think the cheers, when our astronauts came safely back to earth, were genuine too. There were moments when we felt like we were part of something momentous. I just wish there’d been more of those.

Find out more about WTF at: www.brisbanepowerhouse.org or you can check out my previews in Rave Magazine.