We’re nearly half way through the year! May brought all sorts of adventures, including two of my favourite-ever poetry line-ups.

Rachael Briggs, Eleanor Jackson and I had great fun reading poems about sex and logic beside the picture-books section in the Wynnym Library at Poets Up Late. 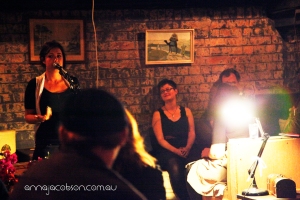 The next week, the band got back together for Sophie Tarrant‘s brain-child, Below Deck. Angela Peita, Eleanor Jackson, Ross Clark and I performed, with Rachael Briggs popping up on the open mic. This is literally a list of my favourite Brisbane poets, and that’s not hyperbole.

Even if that word makes you think of Chris Traeger.

Angela delivered a heart-stopping performance piece, Eleanor subbed in as my boyfriend for a poem (it was Rachael at Poets Up Late; I move fast), while Rachael and Miranda Sparks battled it out as performers reading from books on pet care. Fuck yeah, diverse poetry spaces! I’m definitely looking forward to next month’s Below Deck.

Thank you, also, to Anna Jacobson for the awesome photos.

In the end I had a bit too much fun that week, health-wise, and now I’m back to writing poems in bed with tea. Fortunately, Warsan Shire was able to join me last week (via Skype) for a PJ party/mentorship sesh.

I’m gearing up (and resting up) for my July trip to the Black Forest Writing Seminars in Freiburg. The government’s massive budget cuts to the arts are hugely distressing to hear about; without ArtStart‘s support, there’s no way this chronically-ill weirdo poet would be able to take in this year’s travelling and mentorship opportunities, so it sucks to know that the future of support for artists in Australia is endangered.