Salõn tips its fascinator to soirees of a bygone era, wherein powerful hosts welcomed underground artists into their own parlours. The show is choreographer Timothy Brown’s brainchild, developed in collaboration with its cast with the support of the Judith Wright Centre’s Fresh Ground artistic residency. (Read my recent interview with Brown to find out more.)

In terms of aesthetic, Salõn approaches the sublime. The Judy performance space has undergone several striking transformations of late, and this is one of them. Cabaret seating hugs a series of stages stretched over the space. Andrew Meadow’s lighting design evokes a boudoir decked out in indigo and red silks and velvets. Surreal costumes form the basis for haunting tableaux. In short, Salõn looks pretty damn good. 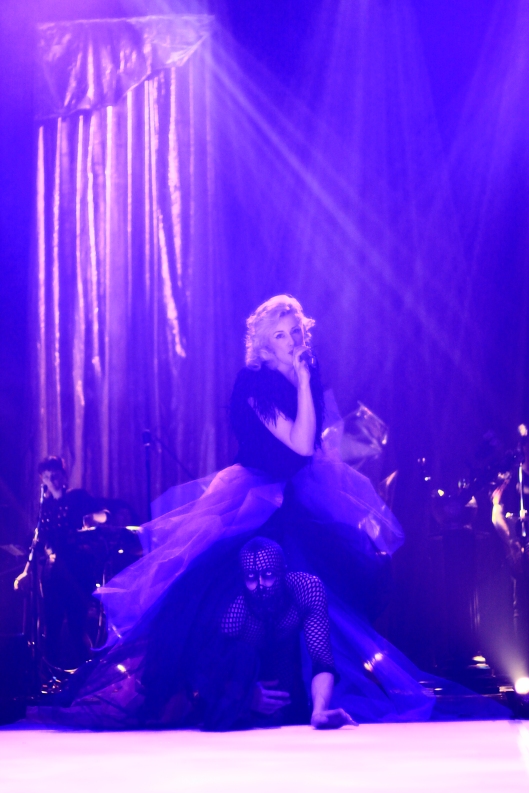 The Oracle and the Serpent: Michelle Xen and Travis Scott (photo by FenLan Chuang)

Michelle Xen and the Neon Wild, as “The Oracle”, provide the soundtrack, but there’s no orchestra pit here; the band is very much a star in its own right. Xen’s neon-electric costume changes alone could almost constitute an entire show.

As for the rest of the cast, Iona Marques ( “Alice”), a dancer trained in Rio de Janeiro, seems to be made of something more malleable than mere human muscle. She’s a charmer as she wanders between our tables; once on stage, she’s something else entirely. Das Unheimlich persists: mesmerising Anthony Trojman (“the Peacock”), perched above The Neon Wild, looks rather like the son of David Bowie in The Man Who Fell to Earth.

Nerida Matthaei, an accomplished dancer and choreographer who has just won a place on the 2013 Australian Korean International Exchange Program, seems uncomfortable in her role as ringmistress “Jean”. Even enthroned atop her “Things” (David Trappes and Alex Weckes-Hucks), Matthaei lacks the confidence to pull off her one-liners with the panache required to elevate them above the level of cheese. Elizabeth Whelan demonstrates the redundancy of dialogue as the silent “Marchesa”, omniscient host and patron, though her talents as a dancer are sadly under-utilised. While the links between acts are tenuous and the pacing occasionally lags, Salõn has a thematic cohesion that helps it to transcend an average variety night. Brown draws on elements of Weimar-era cabaret to create a sense of decaying decadence. His choreography is as slick as his Serpent’s scales. The audience is left with a dreamy impression of colour and movement, light and neon sound.

SALÕN runs at the Judith Wright Centre for only two more nights, till 29 June, 2013.

Brisbanite Emma Dean is in her element in New York, where the difficult-to-define performer has flown to chase her dream of making it big in the Big Apple. She hasn’t had to wait long; with the release of her White EP, the first in a trilogy, she’s already turning all the right heads.

ZF: You’ve been in the Big Apple for a few months now. What’s your favourite New York New, York story from your adventures thus far?
EM: My favourite New York story happened when I was opening for the delicious Courtney Act at The Laurie Beechman. You may remember her as being the sexy drag queen with the killer pegs who stole she show during Aussie Idol. Just before our last performance, Cheyenne Jackson tweeted about my new single, “Phoebe (With Her Whole Heart)”. I’m a huge 30 Rock fan so I knew him as the devilishly-good-looking Canadian from the show. He is also a big Broadway star and pop singer. That night we got word that Cheyenne was hopping off a plane and coming straight to see me play! He is just as charming off screen as he is on. Quite surreal.

ZF: How has the White EP been received thus far?
EM: We’ll see when the royalty cheque comes through in August, won’t we? Ha ha! In all seriousness, I’ve been amazed at the response. I was a little nervous because this EP was so different to my other bodies of work. But I was pleasantly surprised, especially by the live session youtube clips, which collectively have almost 33,000 views in less than two months.

ZF: What’s the plan with White/Red/Black trilogy?
EM: Red will be coming out some time in July then Black will be towards the end of the year. Both EPs will be released digitally and independently and have been recorded and co-produced by the talented man in the bowler hat, Mr Fronz Arp. Red features epic songs about love, lust and heartbreak performed on a grand piano with lush strings and harmonies. Black features rhythmic, jazz-influenced songs from the underground performed on a klunky upright pianaaa, double bass and pots ‘n’ pans! Guest performers on the EPs are Indigo Keane, Fronz Arp, Tony Dean, Janey Mac and my housemates in Ashgrove who became my impromptu clapping ensemble!

ZF: Will you be touring your new work to Australia in the near future, or workin’ on that New York career for a while yet?
EM: I’m creating a new show called “Imaginarium”, which will be an extension of some of my other work. It will be MD’d by James Dobinson and will also feature physical theatre performer and actor, Kate Lee. We will work as a three-piece chamber-pop ensemble incorporating piano, cello, violin, glockenspiel, drum machines, live drums and physical theatre. It would be an absolute dream to come back to Australia with this work. I’ll keep you posted!

ZF: What’s your advice to up-and-coming performers in Brisbane?
EM: If you are an up-and-coming ANYONE in Brisbane, make sure you give yourself an opportunity to get out and see the world, grow as a performer or artist, support your brothers and sisters and begin to create a community. There is often enough to go around. And when there’s not . . . think outside the box.

EMMA DEAN’s White EP is now available as a digital download from iTunes, Amazon Music or direct from Candyrat Records.

Brisbane is very proud of our Briefs boys, who are off to Melbourne and the UK next with their Second Coming. Follow the links to read my five-star Theatre People review:

It’s been a long time coming. Two years have passed since Brisbane’s own cabaret burlesque boys played on a home stage — not that they’ve abandoned us. The Briefs troupe has been all over Europe and Australia, getting the good word out: Brisbane is not — never was — the “cultural black hole of Australia.” We’re the circus capital.

“The queen of Highgate Hill,” Tigerlil opens for the Birdmann with The Unrehearsal, a show that revels in the art of practised incompetence. Tiger Lil falls, spins, tangles and trips with perfect comic timing through a series of routines: whip-cracking, hooping, and puppetry. Tigerlil is always a pleasure to watch; however, each segment of The Unrehearsal feels overlong — if only by a little. From hooping to hoop skirts, she brings us to her stunning finale: a dextrous, devilish puppet climbs the skeleton of her undergarment to the boneyard tune of Waits and Burroughs’ “‘T’ain’t No Sin”.

We refresh our wine glasses and it’s time for the Birdmann’s Events of Momentous Timing. Billed as a one-man mystery, we join the Birdmann — in tails, tie, and tight black pants, with a plastic bag sticking out of one pocket — as he awakens from unconsciousness. Just how did our hero find himself handcuffed to an ironing board, holding one gorgeous black stiletto?

The show follows a loose narrative through several events that help the Birdmann recreate that fateful night of the blackout. His mannerisms — simultaneously awkward and suave, and indeed birdlike — are the key to his comedy. The Birdmann shifts between cabaret-style one-liners (in the Aussie-noir tradition of Paul McDermott, Flacco and friends) and comedic circus feats. He defines this stylistic divide by dragging his plinth — the ironing board — to and from stage right.

It’s hard to take your eyes off the Birdmann. There isn’t exactly one word to describe him — and even the ones I’ve had to settle for don’t quite suffice. He has an eerie command of the surreal, but combined with that, an endearing — almost heartrending — dorky lonesomeness. As an example, this singular artist manages to have us screeching with laughter as he serenades and face-mashes a cupcake — his favourite comfort food and dietary supplement — but he tugs at our heartstrings too.

I won’t spoil the show for those yet to see it. The Birdmann’s mysteries are better unravelled in person. But he brings together a tenuous narrative with surprising cohesion and concludes with what can only be described as a stage spectacular worthy of Cher.

The Events of Momentous Timing, supported by Tigerlil, ran at the Judith Wright Centre from 23 to 24 March 2013.