Sure, it’s an old-school concept — but you may remember a time when there was nothing more romantic than getting a mixtape of music chosen especially for you. Each one had a special meaning, hidden or overt. It was an intimate journey for a couple.

Scott Sneddon and Angela Willock allow us to eavesdrop on their mixtape conversation, as they get to know each other through the medium of music. It’s a show punctuated with recorded music as they play each other the soundtracks of their lives. There are some touching stories and embarrassing confessions — there are always songs we loved that will come back to haunt us.

In short, it’s a series of poetic love letters to the good and not-so-good music of our youth. Each track has a story behind it, a rationale for being included be it a happy memory, a moment of discovery or an admiration for musicians who change our lives.

But it also examines the beginnings of a relationship, the fears, hopes and taboos that come with starting something new. There were a few moments of awkwardness which could have been excellent acting, or genuine nervousness. In this kind of performance it’s difficult to tell.

With a show like this there is plenty to relate to. It sparks memories of falling in love — be it with a girl, a boy or a song. It might make you think back on your own teenage years, consider the songs that shaped you and what your own biographical mixtape might contain. It celebrates awkward dancing and knowing all the words to the most embarrassing songs.

This is an enjoyable and well-constructed show that kept me captivated to the end. Mixtape will leave you with a smile on your face. Do yourself a favour…

Merlynn Tong (Zen Zen Zo) has microphone in hand for her one-woman spectacular, MA MA MA MAD. Her other hand is outstretched to you, her audience. Enter Cyber City.

Q. Describe your show/s in under 25 words.
A. A one-woman dark-comedy offering set in a Karaoke bar that dives into the landscape of my mother’s heart as she enters the realm of suicide.

Q. Anywhere Festival is about making art everywhere. What makes your venue unique?
A. My venue (2002 Cyber City) is perfectly insane. As you enter the space, an Asian lady surrounded by DVDs and VCDs stares at you. Then the aromas of Chinese food awaken your nostrils. As ginger and garlic make their greeting to your senses, the melodious Chinese language and repetitive sounds of the arcade machines tempt your ears, beckoning you closer. Right at the end of the venue, in a tiny Karaoke room fit for only 20, we begin our journey. Gosh, I love this space! So central in the Valley, when I first stepped in 2002 Cyber City, it was like discovering a playground in my own backyard. 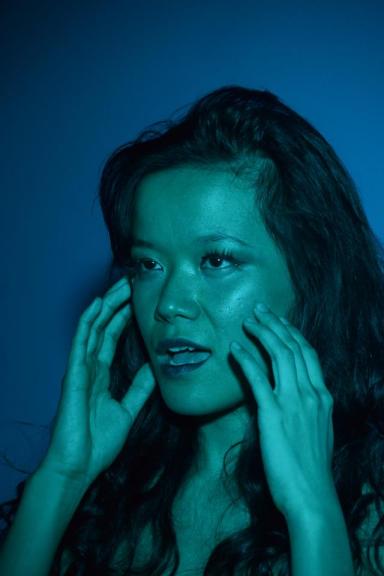 Q. If your show were a new My Little Pony, what would it look like? What would its superpower be?
A. I have never watched My Little Pony before (tsk tsk Singapore!). [It’s a show, now? I must be stuck in the 90s. — Ed.] But I reckon this should have been on my TV screen when I was a kid.

Q. What’s your favourite karaoke standby?
A. Absolutely have to sing “Silent All This Years” by Tori Amos! I just have to add that my mother’s standby is “Yesterday Once More” — I’ve heard her sing this a million times when I was growing up. Her character in my show seduces the whole audience to sing this song with her!
MA MA MA MAD plays at 2002 Cyber City, Fortitude Valley, From 16 to 18 May, 2013. Anywhere Festival.

Anywhere Fest is still all systems go this week. First up, poets Angela Willock and Scott Sneddon join voices for a musical romance. I asked Angela a few quick questions about Mixtape.

Q. Describe your show/s in under 25 words.
A. It’s an off-key and somewhat awkward exploration into two people getting to know each other through music.

Q. Anywhere Festival is about making art everywhere. What makes your venue unique?
A. It’s the quirky little courtyard of someone’s business in the Valley. You could be forgiven for thinking you were hanging out in a stranger’s backyard. 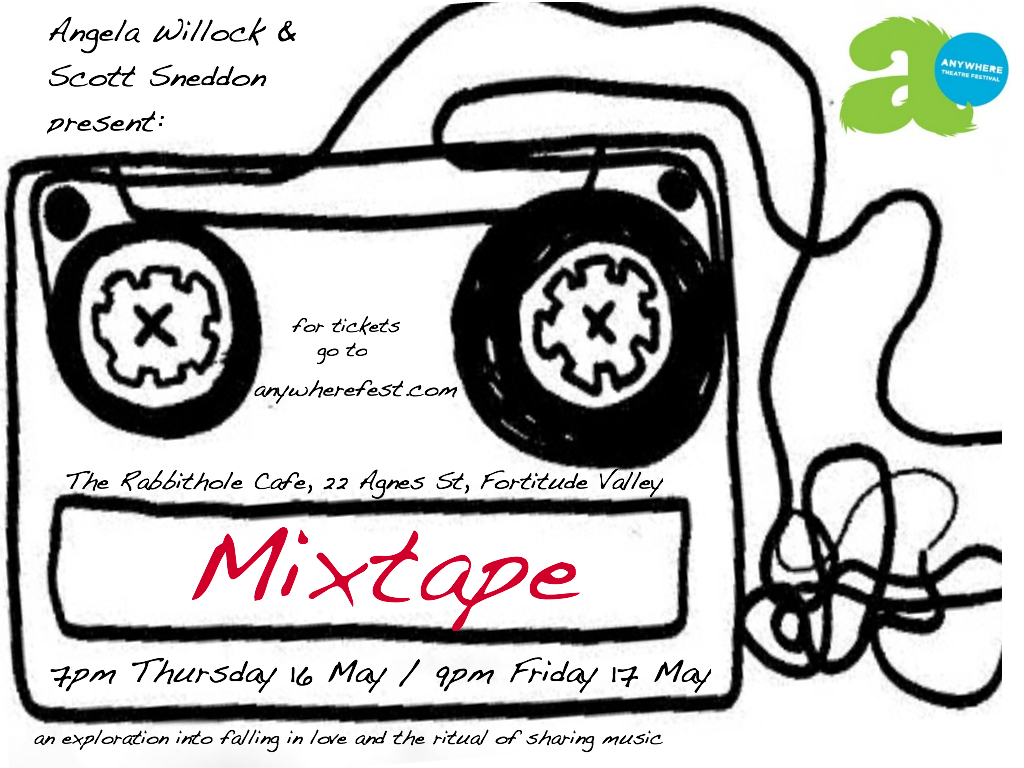 Q. If your show were a new My Little Pony, what would it look like? What would its superpower be?
A. It would wear cowboy boots and hip hop bling and too much eyeliner. It’s superpower would be to explode your head with its off-key singing to bad pop songs.

Q. What was the most embarrassing mixtape you ever sent/received (in hindsight)?
A. I would have to say I’m usually the bearer of bad mixtapes. I went through a phase where I themed them, like, “Oh, you’re sad — here’s 20 songs about depression to make you feel better…”