Just dragged my suitcase in the door after a whirlwind week in Newcastle (at National Young Writers’ Festival) and Melbourne (for the Melb. launch of Salt and Bone at Hares and Hyenas). I met so many fantastic writers and readers at NYWF, thoroughly enjoyed lording it as a judge at the Epic Word Nerd Battledome (pictured, with Jane Howard and Adolfo Aranjuez), and relished reading Foreign Soil on the beach. 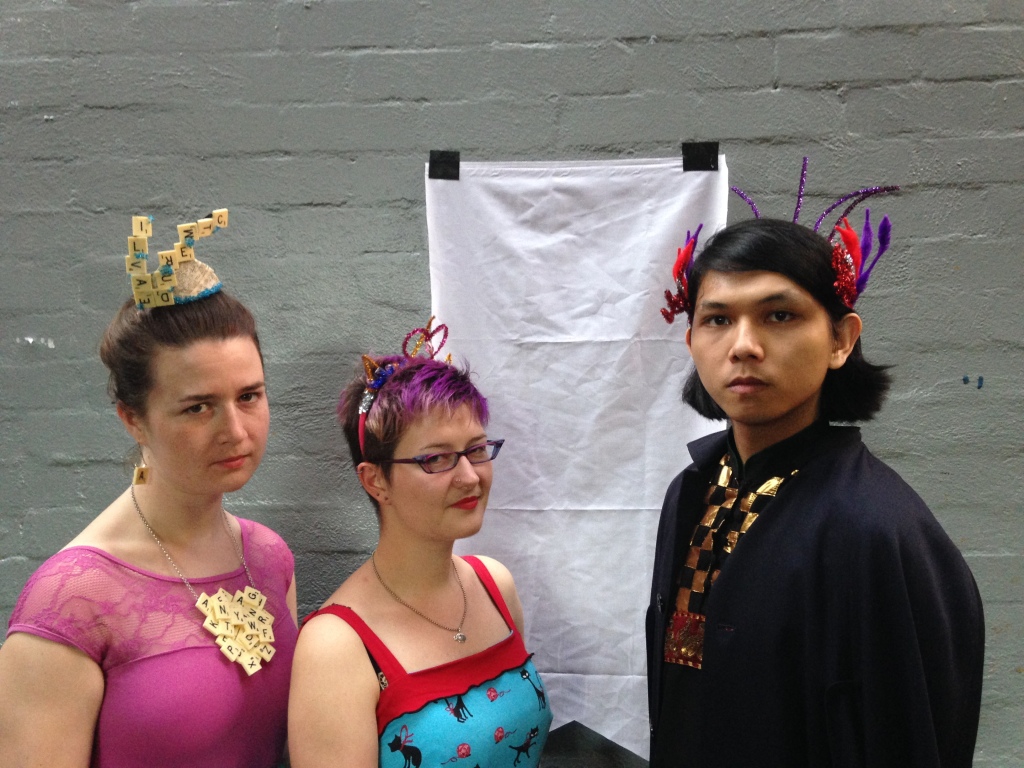 I’m so grateful to ReVerse Butcher and the team at Hares and Hyenas for hosting the Melbourne launch of Salt and Bone. Thank you to everyone who came along. Here are the lovely Broede Carmody’s words on the book (and thanks, Broede, for the launch snap):

“Zen describes herself as an expat of the Voiceworks editorial committee, for which she read and edited poems for a number of years before she turned 25 and we realised she was not just too old but also too disgustingly talented to be involved in the magazine any more.

“But seeing as we’re here for the launch of a poetry collection and not a memoir I should probably talk a little about Zen’s work itself and not just her pretty face.

“I think it’s appropriate that this book is called Salt and Bone because not only does the powerful imagery in Zen’s poetry leave a taste in your mouth but it also affects you physically. Poems like ‘Aftershocks’ deal with sexual assault but importantly use the language of survival. Similarly, other poems celebrate women, sex, polyamory and the queer identity. A lot of poetry out there—particularly the kinds we are introduced to in high school or that are available in book stores—are by old, white men and Zen’s poetry really strikes a chord with me because it’s different. It’s so important that queer Australians see themselves reflected back on the page.

“So with that I would like to say fuck you to the patriarchy, and consider this book launched.”

I had a great time last week reading new poems at Ruckus! Slam and a few of 2014 Arts Queensland poet-in-residence Warsan Shire‘s poems at Riverbend Books. And today Scum Mag has published one of the poems I debuted that night: “Blood Spells“.

Lots of projects will come to fruition in the year’s second half: Rachael Briggs and I will trouble you with two-voiced monster-poems at Queensland Poetry Festival; my friend Kit Loke will launch the poetry blog we’ve been working away at together; and Walleah Press will launch my book Salt and Bone.

Here’s a sneaky preview some of Bettina Marson‘s cover art for Salt and Bone, partly to celebrate the half-year and partly because I can’t wait to share Bettina’s amazing work:

Head over to Scum Mag to read “Aftershocks”, a poem a long time in the works. (Trigger warning: sexual assault and victim blaming.)

Well, technically this is the opposite of a “victim-blaming edition” — here’s a (growing) list of links with something sensible to say in response to Mia Freedman’s “tell your daughters not to drink” article of October 23.

There’ve been dozens of articles and probably thousands of tweets debating victim blaming, rape prevention, rape culture and survivor support in the last couple of weeks. It’s exhausting. If you’re interested in the discussion, you’ve probably experienced diatribe worthy of screencapping and sending to STFU Sexists. Hopefully you’ve had some productive discourse too. Here are some useful links you can use to support and encourage productive discussion surrounding rape prevention. Want to learn how to support survivors better? These are good for that too.

Got another article or link worth adding? Let me know in the comments!