In a word, Edward Gant’s Amazing Feats of Loneliness is sumptuous. Renée Mulder’s set design and Damien Cooper’s exquisite lighting transform La Boite into a worn, warm big top. Finally, this theatre space—often a difficult one to negotiate—puts its best foot forward, rivalling the Spiegeltent for ambience with a raised, tilted platform that evokes a spider web of carnival memories.

Anthony Neilson’s script is rich pickings: witty, ridiculous, poignant, irreverent, poetic and absolutely spellbinding. “In a world where death is at our shoulder every hour,” says Gant “even the smallest act of creativity is a marvellous, courageous thing.” The show is a paean to imagination. Emphasising that “the truth of life lies least of all in the facts,” the over-arching story is revealed through a series of plays-within-the-play (not entirely unlike the layers of Gilliam’s Imaginarium). 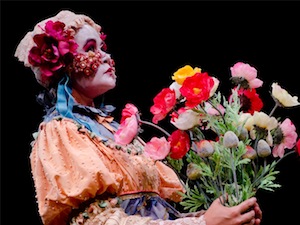 Australian designers Romance Was Born have created wonderful costumes for a show that draws so much inspiration from the days of travelling carnivals. Every inch of the cast seems to sparkle, though I am glad Edward Gant (self-professed “prodigy, soldier, traveller, poet but always and ever a showman”) has such a glorious, glittering cape to distract from a fake potbelly that never quite looks right. The cast of four play numerous roles, from their carnival selves to teddy bears who just want some imaginary tea, whilst clever staging enables a chorus of pimples, bursting with “cheese,” to dance for us. Delicious.

I’ll admit that Paul Bishop is not the kind of Gant I expected, but his voice is perfect and he wears that moustache with finesse. Occasionally, perhaps uncomfortable in the role, he overplays Gant by mere inches and loses the confidence he needs to be ringleader. Bryan Probets* slips most effortlessly into his role as Jack Dearlove (and others), and seems the most versatile and genuine of the cast. Emily Tomlins (recently seen in Julius Caesar) is less convincing—she never quite disappears into her characters—while La Boite newcomer Lindsay Farris is competent, but like Tomlins never quite melds into the setting, unable to lose the Athletic Young Australian Bloke vibe.

Sarah Goodes clearly has a steady hand as director, and Steve Toulmin’s music delivers. With so much working in the play’s favour, the stage certainly was set for a mind-blowing performance. But, as I watched, I couldn’t help but be conscious of the fact that the cast were Actors (with a capital A) only pretending to be carnies. Possibly I go to more circus than is healthy. None the less, this La Boite/Sydney Theatre Company co-production delights, disgusts, enchants and surprises with what must be called amazing feats of theatre.

*I read, in his bio, that Bryan Probets was in the great Aussie vampire flick, Daybreakers. I was certain I remembered him as a vampire scientist working for the baddies. Turns out he was a subsider (a very uncivilised vampire indeed) in full make-up, so there’s no way that I actually remember his face. Memory is so fallible…but “the truth of life lies least of all in the facts,” right? Right?

Edward Gant plays until June 12 at La Boite. You can read my interview with composer and sound designer Steve Toulmin at Rave Magazine. What did you think of the show? Tell me in the comments section below.