Welcome to the first edition of my Can’t Be Artsed mini-reviews of All the Things. Here’s this week’s motley offering: The Dresden Dolls, James and the Giant Peach, and Sherlock Holmes — A Game of Shadows.

I’ve had the pleasure of seeing Amanda Palmer live three times in Brisbane, but though I’ve listened to their albums for years I’d never before seen The Dresden Dolls (Palmer with drummer Brian Viglione) do their thing together. Holy fuck, it was an intense and glorious evening.

Tom Dickens’ (The Jane Austen Argument) lovely vocals opened the show. A brief Briefs interlude was delightful, as expected — Davey Gravy shticks his shtick so well, and Captain Kidd’s sparkly cocktopus is a joy to behold (and he’s an incredible hoopist). I was thrilled to see The Bedroom Philosopher again — though he gigs in Brisbane semi-regularly, fate often thwarts my attendance. Acronymphomaniac, with the lyrics, “I eat SNAGs for breakfast,” is especially rad.

Palmer and Viglione’s dynamic is so natural you feel they might wordlessly improvise, like two dancers — both leading, never stepping on toes. It’s enthralling. So is Brian, both as a highly talented percussionist and a man with no shirt on.

With a half-hour encore, I was pretty sore by the end of the gig — and fairly deaf, but I now grok what Dresden Dolls fans have been extolling for years: this duo is a powerhouse.

Theatre: James and the Giant Peach

Aimed at the 4–8 set, I figured I was still of a reasonable height to see this Harvest Rain adaptation of the Roald Dahl adventure that begins with the protagonist’s parents being gobbled up by a rhinoceros in London and ends in a giant peach in New York. I also took my dad — and we wound up having a fun time, even joining in on the pantomime-style audience interaction.

Josh McIntosh’s costumes are gorgeous (especially Aunt Sponge and Spiker’s frocks) and the homely peach itself is pretty cool. Tim O’Connor (Jesus Christ Superstar) directs this production, and it touched even us oldies. Still, the music was a letdown: tinned orchestration and cheery but forgettable tunes. Variable microphone efficacy didn’t help.

When I spoke to Jack Kelly (playing an earnest young James) for Rave Magazine, he said poor old Earthworm (Belinda Heit) was his favourite character. I have to agree: the blind, legless sadsack has an Eeyore charm. I also liked Dash Kruck’s cockney centipede who goes on to work in a sock factory.

It was quite novel to see a one-hour play at QPAC. I was swept away until the end — and would’ve liked some more, but — alas — it was bedtime for James.

I give it three and a half semicolons.

James circumnavigates the world in his peach until Jan 21. Call 136 246 or book at http://www.qpac.com.au 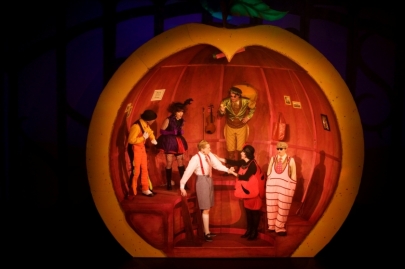 This pseudo-Sherlock adventure launches guns-a-blazin’ and doesn’t let up until curtains, just over two hours later.

Robert Downey Jr is amusing as a slightly psychic ninja Bernard Black. He doesn’t deduce things so much as know them — we learn this through lots of flashing from Significant Foreshadowing Thing to the next. He demonstrates how clever he is by quoting Schubert. We know Moriaty (Jared Harris) is just as clever because he can quote Schubert back and then make witty comments about trout. More importantly, they can both narrate their own actions whilst boxing. Stephen Fry as Mycroft Holmes is great because Stephen Fry is great; for part of the film he is naked. Good. Jude Law sports a Village People moustache..

There are some gypsies in the movie. You can tell because they’re dirty and they steal things from their friends and they eat hedgehog. Are the Romani the last bastion of acceptable racism in cinema? Noomi Rapace, very far from her role as Lisbeth in that-film-with-a-lot-of-sexual-assault-in-it, plays a dim gypsy in a cute hat looking for her brother or something.

But it is fun (spot the amusing anachronisms), and there is air conditioning. (Today was hot enough to kill — seriously, my panda cories fried in their tank.)

Please let me know what you think of Can’t Be Artsed or suggest Things (any things at all!) I might like to review. I hope you enjoyed this photo of Robert Downey Jr as a half-naked, half-in-drag Sherlock smoking on the floor in a train during a gunfight.