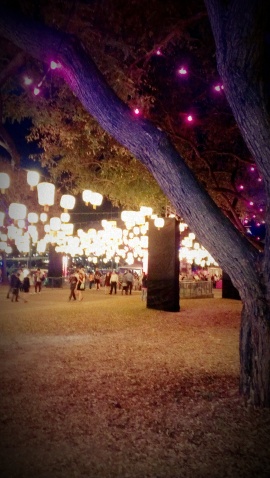 September, festival season, is always my favourite time in Brisbane. The Spiegeltent has appeared by the river; the Lantern Walk illuminates South Bank; and I’m completely immersed in wonderful Brisbane Festival art. Whether for OffStreet Press or in poetry, I’ve been writing up a storm. (It’s nearly rainy season, after all.)

It seems I caught the travel bug on the QPF Roadshow. Next week, I’m off to Melbourne for a short-and-busy break, with two gigs and a wedding (mostly as audience member, with a little poeting). And my tickets are booked for my spell at Varuna, in the Blue Mountains, later in the year.

This weekend I’ll be appearing alongside Stefanie Petrik, Misbah Khokhar and other fine lady-poets at the West End Block Party. I’ll be performing on the sidewalk of Boundary Street at 2pm, September 22.

A couple of weeks ago, I competed in my first slam at West End’s Jam Jar, and tried out the poems I memorised in Rockhampton. It must’ve gone well, because I have a new jar of jam in the pantry and a new zeal for performing. (Also, it was really fun and I loved meeting the good folks that attended and performed.) The plan is to keep workin’ on the spoken-word tactics I learned on tour at the Block Party on Saturday. Expect lots of eye contact.

Next week I’m skipping state for a few days. If you’re in Melbourne (and not, like all of my Voiceworks tribe will be, at National Young Writers’ Festival in Newcastle), come along to the launch of Steve Smart‘s new CD, Voices in My Head on September 28. I’ll be reading alongside (and, if you’re lucky, even singing with) Smarty, Randall Stephens and Maurice McNamara.

There are more gigs coming up in Brisbane in October, but I’ll blather about those closer to the time. At the moment, when I’m not OffStreeting madly, I’m hard at work on the poetry manuscript I’ll be taking to Varuna at the very end of October. It’s slowly coming together, and gosh it’s good to have a deadline. Imagine me sitting in the middle of a pile of scattered poems, in the early hours of each morning, with an orange guardian octopus. Business as usual.