Confessions of a Control Freak finds Belinda Raisin — actor, singer and former ballerina — exploring the pitfalls and foibles of her alter-ego Frances, a self-confessed control freak. But is she, really? Frances herself seems unsure. Certainly she likes a good list — Raisin makes a good start early on with an aria to her lists: lists that appear on post-its and clipboards, laminated on the toilet wall and unravelling for metres out of a filing cabinet. It sets the scene well, and the gangly faux-sexy dance as she twines the enormous list around herself and between her legs is a good indicator of what’s to come — Raisin plays the sexy dork well, and she makes Frances simultaneously a harried neurotic and a bit of an everywoman. And that’s what Confessions is really all about: can women (or this woman, at least) really have it all? It’s an old theme, but that doesn’t mean it’s a bad one, and Raisin tackles it endearingly, expanding on habits and tics that have the audience chuckling in recognition.

Confessions of a Control Freak opens with Jamie Teh at the piano. Teh, blind since birth, shares the stage with Raisin for the duration of the show, providing musical accompaniment and sound effects with unobtrusive dignity — even whilst holding up a sign that says, “She has I.B.S.”. He and Jennifer Teh are responsible for the musical compositions, and the soundscape ranges from 70s electro-pop to Disney. The music comes as a surprise, and audiences might have expected more original work, but the use of iconic hits works to the show’s advantage. Raisin’s voice is quite good — it’s arguably the weakest element of the show, but that doesn’t really matter. The point of sampling Adele’s “Someone Like You” with regard to one of Frances’s (many, many) deceased pets is not to showcase Raisin’s pipes, and it doesn’t need to be.  Mary Poppins’s “A Spoonful of Sugar” (confession: Frances LOVES cleaning) is, in this instance, a very large glass of wine. And that vodka taking up door space in the fridge. 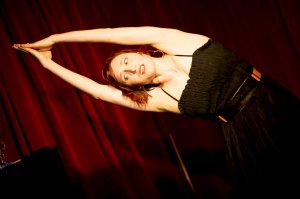 The Poppins-themed cleaning montage sees Raisin, having unearthed a trove of useless treasures, zooming around the Judith Wright Centre in rollerblades, handing out glasses of wine to audience members. It’s one of the better “feed the audience” inclusions I’ve come across, and watching a woman fly around a cluttered space on wheels, brandishing brimming glasses of alcohol, evokes precisely the amused-horror you might feel watching a friend having a manic moment. Needless to say, the job does not get done.

It’s a short performance, clocking in at around 60 minutes, but sometimes the material feels a little thin. Perhaps that’s because it’s a cabaret about the everyday — there’s no velvet here, nor feathers — but the pacing feels occasionally sluggish at moments.  Frances turns serious toward the end — an abrupt segue from the dead pets montage, which has the audience highly entertained — meditating on children, and whether having babies is something she really wants, or whether it’s just the next item on the list. This is a question that’s probably been considered by every couple of child-rearing age for the last few decades; it’s no doubt relevant. But something about it feels a little disappointing, like there’s nothing revelatory to be had here. I was happier when Frances’s “bundle of joy” was set to be a puppy (pity about what happened to that bunny, though).

As a whole the show is very warm, and Raisin’s slightly gawky physical humour goes down well with the crowd. The Judy is an excellent venue choice for the show, fostering the intimacy it replies on and allowing the audience to become part of the antics. It’s worth a visit for the slightly-scattered list-maker in all of us. After all, we’re all just trying to keep a job, find love, stay fit, see our friends and develop some hobbies, right?

CONFESSIONS OF A CONTROL FREAK is on at the Judith Wright Centre for Contemporary Arts until 17 August. Tickets $19–24.