ZENOBIA FROST: Last year’s Fetish Fridays series were a great success, blending performance and play. What has changed as the event’s concept has developed through 2014?
LUCERO: The success of last year’s Fetish Fridays meant that we didn’t want to change much about the events themselves. What we’ve done is have the events at three different venues including holding one on the Gold Coast to make them more accessible to those living outside of Brisbane.

ZF: FFs are developed in collaboration with Brisbane Leather Pride. How important has it been to create a wholly inclusive space?
L: Incredibly important. Part of the Brisbane Leather Pride mandate is to be inclusive of all genders, orientations, lifestyles, etc. We aim for these events to be entertaining, educational and sometimes challenging but we endeavour most of all in making them accessible to everyone.

ZF: What will make even newbies feel at home?
L: The Fetish Fridays events are a great introduction due to the performance nature of the events. Many kink related events are promoted solely as ‘play’ parties, which implies that you must be an active participant to attend. While I know from experience that this is not the case, it certainly can make people nervous about attending. What you will get with Fetish Fridays #3 is a night of entertainment that will show a newcomer to the scene some of the things possible in the kink world — a showcase if you will. The BLP committee members in attendance will also be available to answer any questions people may have. 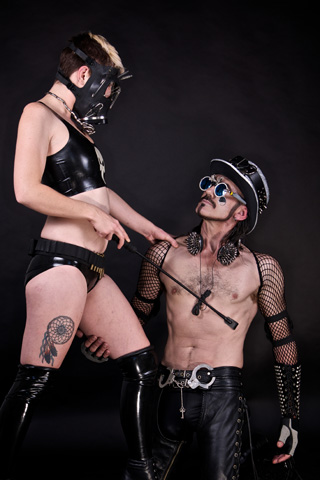 ZF: Tell me about the performances planned for FF #3. What will be your highlights?
L: Redbear and his beautiful partner Namaiki are seasoned performers who will no doubt put on a very moving rope performance. Dolly de Ville is spectacular on pole and fresh from competing in Miss Pole Australia. Reigning ‘Miss Burleque Brisbane’ Magnolia Knife will add some sass, while you can expect something dark from self-proclaimed Old Guard Goths Rex and Ruby.
I will be doing a suspension piece with the amazing Nix, but the highlight — for me at least — will be Master Pierre, who has something very special indeed planned with his pup Jolt. I do not want to give the game away before the night, but Master Pierre’s show will be both entertaining and challenging.

ZF: Your speciality is rope — though it’s not your only area of expertise. How do you make rope-play performative?
L: Honestly? By having an amazing rope bottom, Nix, who does all the hard work and makes me look good. Match this with some theatre, great music and costuming, and I find it is possible to transform a fairly simple rope suspension into something that will take the audience on a journey. Like most performance-based art I truly believe it is about telling a story and having the audience engage.

ZF: Tell me about FF’s newest space. How will it transform from performance to play space?
L: For the final Fetish Friday of 2014 we have chosen a secret location in the heart of Milton. Due to the successful nature of the shows last year, the chosen venue was practically at capacity, so this year we picked a bigger venue with plenty of space.
As the performances come to a close the lighting will dim and the music will start to change the atmosphere of the venue into something of a more underground club feel. As with all kink events, it is the people that make the most prevalent changes and I would expect to see the kinky regulars to start playing almost straight away. Non-active participants are encouraged to stay, watch and ask questions or if they feel comfortable get involved in a safe environment under the watchful eyes of staff and dungeon monitors.

ZF: The event also has a charitable side. Tell me about FF’s support of the Queensland AIDS Council (QuAC).
L: Proceeds from the event will go to support Brisbane Leather Pride this year, as we have just applied to become incorporated after our Inaugural General Meeting in May. While BLP is a not-for-profit venture and all non-performers donate their time voluntarily, there are of course some costs involved. That said, we have a long running association with QuAC and so we donate all monies raised from the excellent raffles held at each Fetish Friday to them. So far, over the first two events, we have raised over $500 for QuAC.

ZF: What’s the number-one thing that makes Fetish Fridays a highlight of Brisbane’s kinky calendar?
L: The kink scene is by its very nature is a somewhat underground place and still taboo in many people’s minds. This is one of the few times that the kink-curious can meet with the experienced and ask real people real questions in a safe and well-managed space.

FETISH FRIDAYS #3 runs from 7pm – 2am on 5 September 2014 in Milton, with the show itself starting at 8pm. (The exact location is sent with your ticket confirmation, but it’s close to Milton train station.) Tickets $30.