We’re nearly half way through the year! May brought all sorts of adventures, including two of my favourite-ever poetry line-ups.

Rachael Briggs, Eleanor Jackson and I had great fun reading poems about sex and logic beside the picture-books section in the Wynnym Library at Poets Up Late.

The next week, the band got back together for Sophie Tarrant‘s brain-child, Below Deck. Angela Peita, Eleanor Jackson, Ross Clark and I performed, with Rachael Briggs popping up on the open mic. This is literally a list of my favourite Brisbane poets, and that’s not hyperbole.

Even if that word makes you think of Chris Traeger.

Angela delivered a heart-stopping performance piece, Eleanor subbed in as my boyfriend for a poem (it was Rachael at Poets Up Late; I move fast), while Rachael and Miranda Sparks battled it out as performers reading from books on pet care. Fuck yeah, diverse poetry spaces! I’m definitely looking forward to next month’s Below Deck.

Thank you, also, to Anna Jacobson for the awesome photos.

In the end I had a bit too much fun that week, health-wise, and now I’m back to writing poems in bed with tea. Fortunately, Warsan Shire was able to join me last week (via Skype) for a PJ party/mentorship sesh.

I’m gearing up (and resting up) for my July trip to the Black Forest Writing Seminars in Freiburg. The government’s massive budget cuts to the arts are hugely distressing to hear about; without ArtStart‘s support, there’s no way this chronically-ill weirdo poet would be able to take in this year’s travelling and mentorship opportunities, so it sucks to know that the future of support for artists in Australia is endangered.

Hullo! Woah — it’s December?! Christmas has infiltrated my living room already. (MY FAVOURITE THING IS WRAPPING PRESENTS. DON’T RUIN IT BY OPENING THEM.) In about two seconds, the year will be over and we’ll be coughing up dust from the fireworks. I just zoomed back from Adelaide, where this happened: 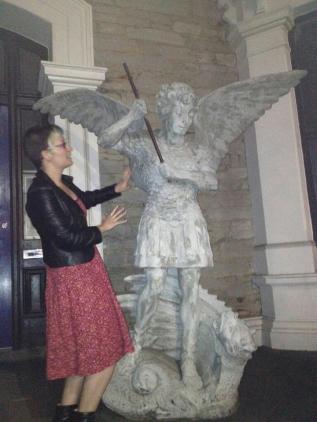 And since I did not meet my doom at the hands of this guy or his dragon fiend, I’ll be performing at the Wynnum Library this Thursday, with Ross Clark and Rob Morris. These gents are two of my favourite poets, and I count them both as friends and mentors. I toured Australia with Rob in 2009, and once upon a time Ross and I were known in some circles as Rocco and Spanki, poetic adventurers.

Best of all, there will be wine and nibbles, and we’ll all be available to sign books, breasts, etc. I’ll be sampling from forthcoming publications, and debuting a suite of poems I wrote at Varuna, for my grandfather. No doubt we’ll all chuck in some old favourites. Fingers crossed Rob returns us to “The Cloudland Funicular Cha-Cha” — to a time “when the whole world wore hats.”

Under a Daylight Moon

(previewing her debut volume from SweetWater)

(further tales from the rock-n-roll after-life)

(in harmony with the spheres)

[near the big antiques barn & next to the chocolate shop!]

Issue 4 is out now, with poems from Zenobia Frost and Ross Clark. Check it out!

Ross Clark is on tour
with poetic buddies Nathan Shepherdson and Helen Avery.

They’ve got books for sale too, but do come along just for the performances if you like. There is a cover charge for some of the events.

“Into this ark the syllables come one by one,
and their congress invents grunt and howl
and dawn chorus, chatter and shriek and
how to count the stars beyond the compass

Dig out those unpublished works!
Give voice to those unsung lyrics…
Share with us your favourite poem.

Poetry in the Pub: An initiative of the NTEU QUT Branch Crux Committee.

Do you crave Zen word-pikelets?

Probably not, but nevermind that.

Experience the madness of spoken word at the Queensland Poetry Festival in August, or monthly at SpeedPoets.

Colour by Numbers is a musical poetry (or poetic musical) project that musician Timothy Tate and I began toying with a year or so ago. We’re slowly evolving into a nostalgic jazz-poetry extravaganza. Watch this space. We have a new website in the works, but check out our oldish Myspace here. As you can see, we’ve had a big name change, dropping that pesky ‘ing’.

Rocco and Spanki (aka Ross Clark and I) will be performing at the Trash Video fundraiser on the 4th of July at Ahimsa House, 26 Horan Street, West End. More details to come. We will also appear at the Queensland Poetry Festival’s Poetry in the Pub event on August 14th, 2008.

Oh, and keep an eye out for me in the May 08 issue of LOTL magazine.